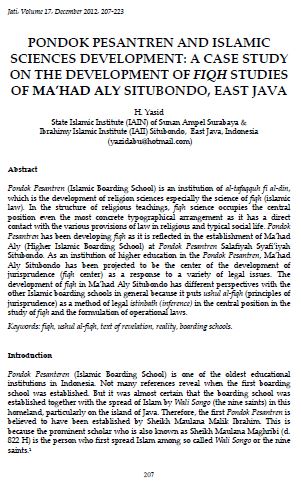 Pondok Pesantren (Islamic Boarding School) is an institution of al-tafaqquh fi al-din, which is the development of religion sciences especially the science of fiqh (islamic law). In the structure of religious teachings, fiqh science occupies the central position even the most concrete typographical arrangement as it has a direct contact with the various provisions of law in religious and typical social life. Pondok Pesantren has been developing fiqh as it is reflected in the establishment of Ma’had Aly (Higher Islamic Boarding School) at Pondok Pesantren Salafiyah Syafi’iyah Situbondo. As an institution of higher education in the Pondok Pesantren, Ma’had Aly Situbondo has been projected to be the center of the development of jurisprudence (fiqh center) as a response to a variety of legal issues. The development of fiqh in Ma’had Aly Situbondo has different perspectives with the other Islamic boarding schools in general because it puts ushul al-fiqh (principles of jurisprudence) as a method of legal istinbath (inference) in the central position in the study of fiqh and the formulation of operational laws.