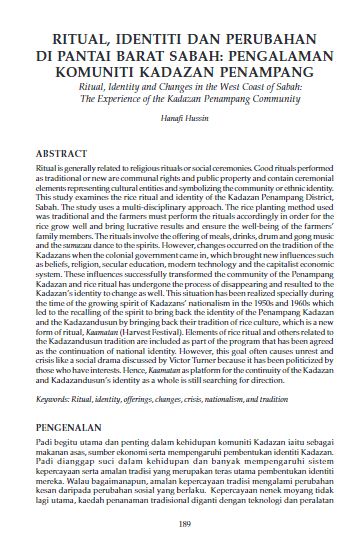 Ritual is generally related to religious rituals or social ceremonies. Good rituals performed as traditional or new are communal rights and public property and contain ceremonial elements representing cultural entities and symbolizing the community or ethnic identity. This study examines the rice ritual and identity of the Kadazan Penampang District, Sabah. The study uses a multi-disciplinary approach. The rice planting method used was traditional and the farmers must perform the rituals accordingly in order for the rice grow well and bring lucrative results and ensure the well-being of the farmers’ family members. The rituals involve the offering of meals, drinks, drum and gong music and the sumazau dance to the spirits. However, changes occurred on the tradition of the Kadazans when the colonial government came in, which brought new influences such as beliefs, religion, secular education, modern technology and the capitalist economic system. These influences successfully transformed the community of the Penampang Kadazan and rice ritual has undergone the process of disappearing and resulted to the Kadazan’s identity to change as well. This situation has been realized specially during the time of the growing spirit of Kadazans’ nationalism in the 1950s and 1960s which led to the recalling of the spirit to bring back the identity of the Penampang Kadazan and the Kadazandusun by bringing back their tradition of rice culture, which is a new form of ritual, Kaamatan (Harvest Festival). Elements of rice ritual and others related to the Kadazandusun tradition are included as part of the program that has been agreed as the continuation of national identity. However, this goal often causes unrest and crisis like a social drama discussed by Victor Turner because it has been politicized by those who have interests. Hence, Kaamatan as platform for the continuity of the Kadazan and Kadazandusun’s identity as a whole is still searching for direction.