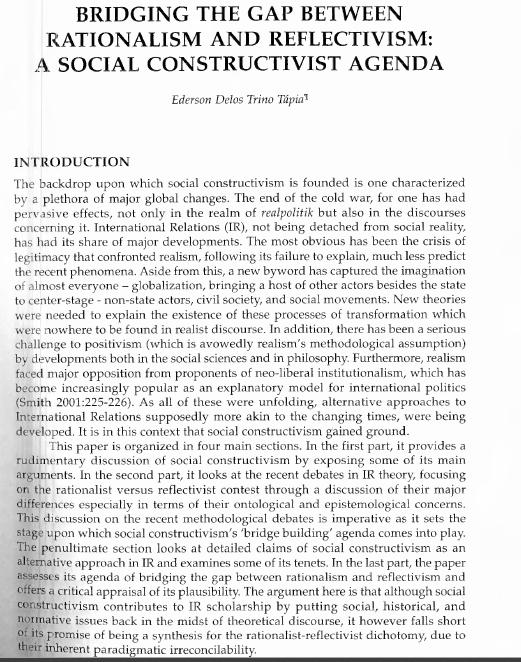 The backdrop upon which social constructivism is founded is one characterized by a plethora of major global changes. The end of the cold war, for one has had pervasive effects, not only in the realm of realpolitik but also in the discourses concerning it. International Relations (IR), not being detached from social reality, has had its share of major developments. The most obvious has been the crisis of legitimacy that confronted realism, following its failure to explain, much less predict the recent phenomena. Aside from this, a new byword has captured the imagination of almost everyone – globalization, bringing a host of other actors besides the state to centerstage - non-state actors, civil society, and social movements. New theories were needed to explain the existence of these processes of transformation which were nowhere to be found in realist discourse. In addition, there has been a serious challenge to positivism (which is avowedly realism’s methodological assumption) by developments both in the social sciences and in philosophy. Furthermore, realism faced major opposition from proponents of neo-liberal institutionalism, which has become increasingly popular as an explanatory model for international politics (Smith 2001:225-226). As all of these were unfolding, alternative approaches to International Relations supposedly more akin to the changing times, were being developed. It is in this context that social constructivism gained ground. This paper is organized in four main sections. In the first part, it provides a rudimentary discussion of social constructivism by exposing some of its main arguments. In the second part, it looks at the recent debates in IR theory, focusing on the rationalist versus reflectivist contest through a discussion of their major differences especially in terms of their ontological and epistemological concerns. This discussion on the recent methodological debates is imperative as it sets the stage upon which social constructivism’s ‘bridge building’ agenda comes into play. The penultimate section looks at detailed claims of social constructivism as an alternative approach in IR and examines some of its tenets. In the last part, the paper assesses its agenda of bridging the gap between rationalism and reflectivism and offers a critical appraisal of its plausibility. The argument here is that although social constructivism contributes to IR scholarship by putting social, historical, and normative issues back in the midst of theoretical discourse, it however falls short of its promise of being a synthesis for the rationalist-reflectivist dichotomy, due to their inherent paradigmatic irreconcilability.