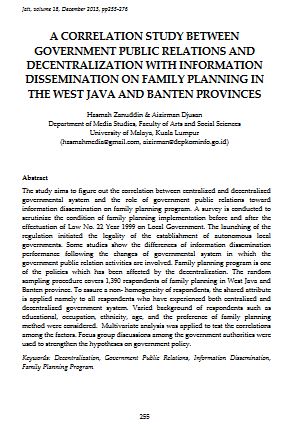 The study aims to figure out the correlation between centralized and decentralized governmental system and the role of government public relations toward information dissemination on family planning program. A survey is conducted to scrutinize the condition of family planning implementation before and after the effectuation of Law No. 22 Year 1999 on Local Government. The launching of the regulation initiated the legality of the establishment of autonomous local governments. Some studies show the differences of information dissemination performance following the changes of governmental system in which the government public relation activities are involved. Family planning program is one of the policies which has been affected by the decentralization. The random sampling procedure covers 1,390 respondents of family planning in West Java and Banten province. To assure a non- homogeneity of respondents, the shared attribute is applied namely to all respondents who have experienced both centralized and decentralized government system. Varied background of respondents such as educational, occupation, ethnicity, age, and the preference of family planning method were considered. Multivariate analysis was applied to test the correlations among the factors. Focus group discussions among the government authorities were used to strengthen the hypotheses on government policy.