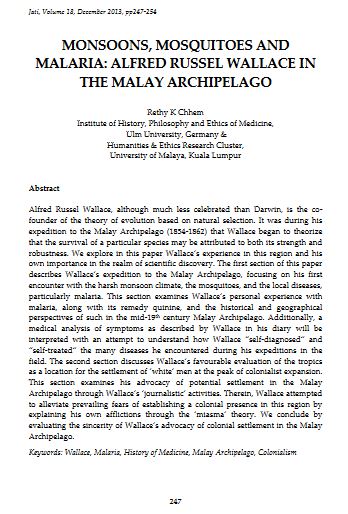 Alfred Russel Wallace, although much less celebrated than Darwin, is the co-founder of the theory of evolution based on natural selection. It was during his expedition to the Malay Archipelago (1854-1862) that Wallace began to theorize that the survival of a particular species may be attributed to both its strength and robustness. We explore in this paper Wallace’s experience in this region and his own importance in the realm of scientific discovery. The first section of this paper describes Wallace’s expedition to the Malay Archipelago, focusing on his first encounter with the harsh monsoon climate, the mosquitoes, and the local diseases, particularly malaria. This section examines Wallace’s personal experience with malaria, along with its remedy quinine, and the historical and geographical perspectives of such in the mid-19th century Malay Archipelago. Additionally, a medical analysis of symptoms as described by Wallace in his diary will be interpreted with an attempt to understand how Wallace ‚self-diagnosed‛ and ‚self-treated‛ the many diseases he encountered during his expeditions in the field. The second section discusses Wallace’s favourable evaluation of the tropics as a location for the settlement of ‘white’ men at the peak of colonialist expansion. This section examines his advocacy of potential settlement in the Malay Archipelago through Wallace’s ‘journalistic’ activities. Therein, Wallace attempted to alleviate prevailing fears of establishing a colonial presence in this region by explaining his own afflictions through the ‘miasma’ theory. We conclude by evaluating the sincerity of Wallace’s advocacy of colonial settlement in the Malay Archipelago.