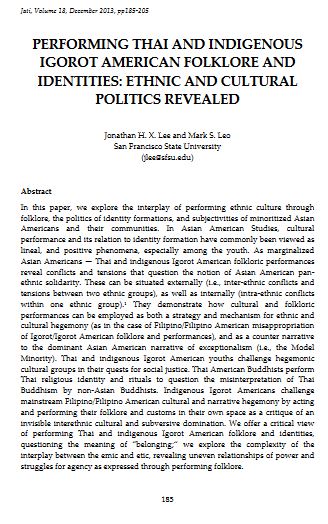 In this paper, we explore the interplay of performing ethnic culture through folklore, the politics of identity formations, and subjectivities of minoritized Asian Americans and their communities. In Asian American Studies, cultural performance and its relation to identity formation have commonly been viewed as lineal, and positive phenomena, especially among the youth. As marginalized Asian Americans â€” Thai and indigenous Igorot American folkloric performances reveal conflicts and tensions that question the notion of Asian American pan-ethnic solidarity. These can be situated externally (i.e., inter-ethnic conflicts and tensions between two ethnic groups), as well as internally (intra-ethnic conflicts within one ethnic group).1 They demonstrate how cultural and folkloric performances can be employed as both a strategy and mechanism for ethnic and cultural hegemony (as in the case of Filipino/Filipino American misappropriation of Igorot/Igorot American folklore and performances), and as a counter narrative to the dominant Asian American narrative of exceptionalism (i.e., the Model Minority). Thai and indigenous Igorot American youths challenge hegemonic cultural groups in their quests for social justice. Thai American Buddhists perform Thai religious identity and rituals to question the misinterpretation of Thai Buddhism by non-Asian Buddhists. Indigenous Igorot Americans challenge mainstream Filipino/Filipino American cultural and narrative hegemony by acting and performing their folklore and customs in their own space as a critique of an invisible interethnic cultural and subversive domination. We offer a critical view of performing Thai and indigenous Igorot American folklore and identities, questioning the meaning of â€šbelonging;â€› we explore the complexity of the interplay between the emic and etic, revealing uneven relationships of power and struggles for agency as expressed through performing folklore.