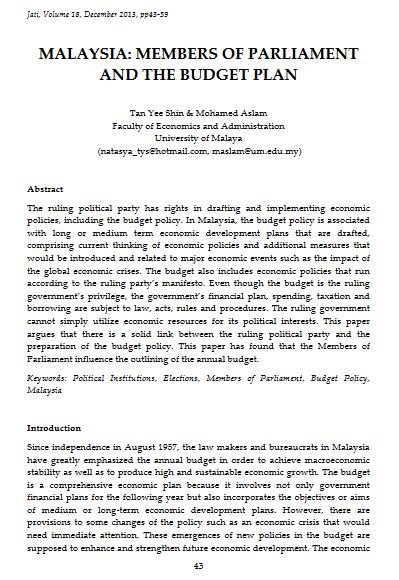 The ruling political party has rights in drafting and implementing economic policies, including the budget policy. In Malaysia, the budget policy is associated with long or medium term economic development plans that are drafted, comprising current thinking of economic policies and additional measures that would be introduced and related to major economic events such as the impact of the global economic crises. The budget also includes economic policies that run according to the ruling party’s manifesto. Even though the budget is the ruling government’s privilege, the government’s financial plan, spending, taxation and borrowing are subject to law, acts, rules and procedures. The ruling government cannot simply utilize economic resources for its political interests. This paper argues that there is a solid link between the ruling political party and the preparation of the budget policy. This paper has found that the Members of Parliament influence the outlining of the annual budget.