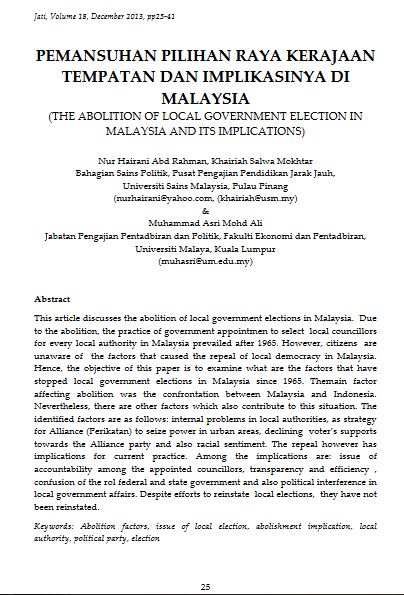 This article discusses the abolition of local government elections in Malaysia. Due to the abolition, the practice of government appointmen to select local councillors for every local authority in Malaysia prevailed after 1965. However, citizens are unaware of the factors that caused the repeal of local democracy in Malaysia. Hence, the objective of this paper is to examine what are the factors that have stopped local government elections in Malaysia since 1965. Themain factor affecting abolition was the confrontation between Malaysia and Indonesia. Nevertheless, there are other factors which also contribute to this situation. The identified factors are as follows: internal problems in local authorities, as strategy for Alliance (Perikatan) to seize power in urban areas, declining voter’s supports towards the Alliance party and also racial sentiment. The repeal however has implications for current practice. Among the implications are: issue of accountability among the appointed councillors, transparency and efficiency , confusion of the rol federal and state government and also political interference in local government affairs. Despite efforts to reinstate local elections, they have not been reinstated.