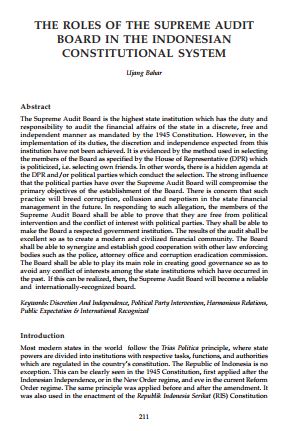 The Supreme Audit Board is the highest state institution which has the duty and responsibility to audit the financial affairs of the state in a discrete, free and independent manner as mandated by the 1945 Constitution. However, in the implementation of its duties, the discretion and independence expected from this institution have not been achieved. It is evidenced by the method used in selecting the members of the Board as specified by the House of Representative (DPR) which is politicized, i.e. selecting own friends. In other words, there is a hidden agenda at the DPR and/or political parties which conduct the selection. The strong influence that the political parties have over the Supreme Audit Board will compromise the primary objectives of the establishment of the Board. There is concern that such practice will breed corruption, collusion and nepotism in the state financial management in the future. In responding to such allegation, the members of the Supreme Audit Board shall be able to prove that they are free from political intervention and the conflict of interest with political parties. They shall be able to make the Board a respected government institution. The results of the audit shall be excellent so as to create a modern and civilized financial community. The Board shall be able to synergize and establish good cooperation with other law enforcing bodies such as the police, attorney office and corruption eradication commission. The Board shall be able to play its main role in creating good governance so as to avoid any conflict of interests among the state institutions which have occurred in the past. If this can be realized, then, the Supreme Audit Board will become a reliable and internationally-recognized board.