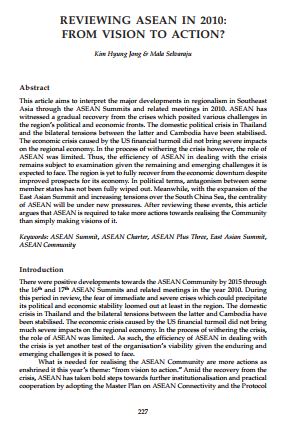 This article aims to interpret the major developments in regionalism in Southeast Asia through the ASEAN Summits and related meetings in 2010. ASEAN has witnessed a gradual recovery from the crises which posited various challenges in the region’s political and economic fronts. The domestic political crisis in Thailand and the bilateral tensions between the latter and Cambodia have been stabilised. The economic crisis caused by the US financial turmoil did not bring severe impacts on the regional economy. In the process of withering the crisis however, the role of ASEAN was limited. Thus, the efficiency of ASEAN in dealing with the crisis remains subject to examination given the remaining and emerging challenges it is expected to face. The region is yet to fully recover from the economic downturn despite improved prospects for its economy. In political terms, antagonism between some member states has not been fully wiped out. Meanwhile, with the expansion of the East Asian Summit and increasing tensions over the South China Sea, the centrality of ASEAN will be under new pressures. After reviewing these events, this article argues that ASEAN is required to take more actions towards realising the Community than simply making visions of it.