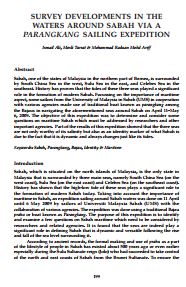 Sabah, one of the states of Malaysia in the northern part of Borneo, is surrounded by South China Sea in the west, Sulu Sea in the east, and Celebes Sea in the southeast. History has proven that the tides of these three seas played a significant role in the formation of modern Sabah. Focussing on the importance of maritime aspect, some sailors from the University of Malaysia in Sabah (UMS) in cooperation with various agencies made use of traditional boat known as parangkang among the Bajaus in navigating the aforementioned seas around Sabah on April 11â€“May 6, 2009. The objective of this expedition was to determine and consider some questions on maritime Sabah which must be addressed by researchers and other important agencies. Part of the results of this expedition showed that the three seas are not only worthy of its salinity but also as an identity marker of what Sabah is due to the fact that it is dynamic and always changes just like its tides.