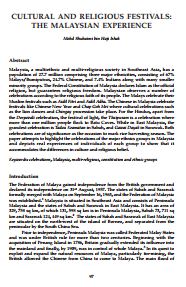 Malaysia, a multiethnic and multi-religious society in Southeast Asia, has a population of 27.7 million comprising three major ethnicities, consisting of 67% Malays/Bumiputras, 24.7% Chinese, and 7.4% Indians along with many smaller minority groups. The Federal Constitution of Malaysia declares Islam as the official religion, but guarantees religious freedom. Malaysian observes a number of celebrations according to the religious faith of its people. The Malays celebrate their Muslim festivals such as Aidil Fitri and Aidil Adha. The Chinese in Malaysia celebrate festivals like Chinese New Year and Chap Goh Mei where cultural celebrations such as the lion dances and Chingay procession take place. For the Hindus, apart from the Deepavali celebration, the festival of light, the Thaipusam is a celebration where more than one million people flock to Batu Caves. While in East Malaysia, the grandest celebration is Tadau Keamatan in Sabah, and Gawai Dayak in Sarawak. Both celebrations are of significance as the occasion to mark rice harvesting season. The paper attempts to highlight the celebrations of the major ethnics groups in Malaysia and depicts real experiences of individuals of each group to show that it accommodates the differences in culture and religious belief.