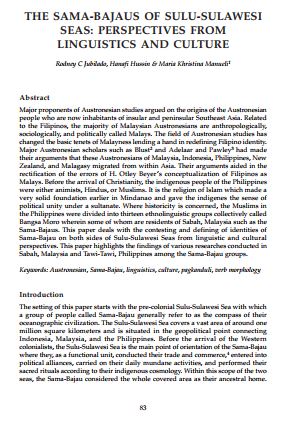 Major proponents of Austronesian studies argued on the origins of the Austronesian people who are now inhabitants of insular and peninsular Southeast Asia. Related to the Filipinos, the majority of Malaysian Austronesians are anthropologically, sociologically, and politically called Malays. The field of Austronesian studies has changed the basic tenets of Malayness lending a hand in redefining Filipino identity. Major Austronesian scholars such as Blust2 and Adelaar and Pawley3 had made their arguments that these Austronesians of Malaysia, Indonesia, Philippines, New Zealand, and Malagasy migrated from within Asia. Their arguments aided in the rectification of the errors of H. Otley Beyer’s conceptualization of Filipinos as Malays. Before the arrival of Christianity, the indigenous people of the Philippines were either animists, Hindus, or Muslims. It is the religion of Islam which made a very solid foundation earlier in Mindanao and gave the indigenes the sense of political unity under a sultanate. Where historicity is concerned, the Muslims in the Philippines were divided into thirteen ethnolinguistic groups collectively called Bangsa Moro wherein some of whom are residents of Sabah, Malaysia such as the Sama-Bajaus. This paper deals with the contesting and defining of identities of Sama-Bajau on both sides of Sulu-Sulawesi Seas from linguistic and cultural perspectives. This paper highlights the findings of various researches conducted in Sabah, Malaysia and Tawi-Tawi, Philippines among the Sama-Bajau groups.