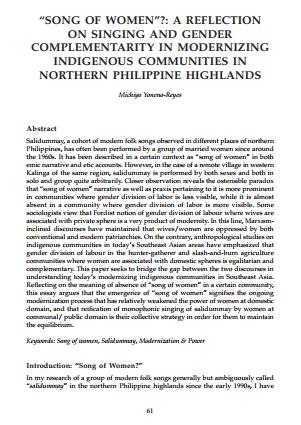 Salidummay, a cohort of modern folk songs observed in different places of northern Philippines, has often been performed by a group of married women since around the 1960s. It has been described in a certain context as “song of women” in both emic narrative and etic accounts. However, in the case of a remote village in western Kalinga of the same region, salidummay is performed by both sexes and both in solo and group quite arbitrarily. Closer observation reveals the ostensible paradox that “song of women” narrative as well as praxis pertaining to it is more prominent in communities where gender division of labor is less visible, while it is almost absent in a community where gender division of labor is more visible. Some sociologists view that Fordist notion of gender division of labour where wives are associated with private sphere is a very product of modernity. In this line, Marxisminclined discourses have maintained that wives/women are oppressed by both conventional and modern patriarchies. On the contrary, anthropological studies on indigenous communities in today’s Southeast Asian areas have emphasized that gender division of labour in the hunter-gatherer and slash-and-burn agriculture communities where women are associated with domestic spheres is egalitarian and complementary. This paper seeks to bridge the gap between the two discourses in understanding today’s modernizing indigenous communities in Southeast Asia. Reflecting on the meaning of absence of “song of women” in a certain community, this essay argues that the emergence of “song of women” signifies the ongoing modernization process that has relatively weakened the power of women at domestic domain, and that reification of monophonic singing of salidummay by women at communal/ public domain is their collective strategy in order for them to maintain the equilibrium.