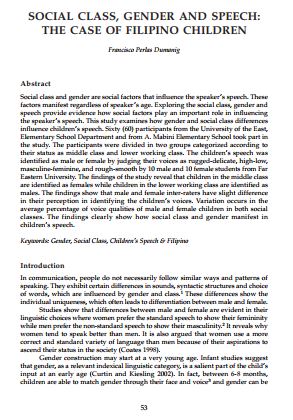 Social class and gender are social factors that influence the speaker’s speech. These factors manifest regardless of speaker’s age. Exploring the social class, gender and speech provide evidence how social factors play an important role in influencing the speaker’s speech. This study examines how gender and social class differences influence children’s speech. Sixty (60) participants from the University of the East, Elementary School Department and from A. Mabini Elementary School took part in the study. The participants were divided in two groups categorized according to their status as middle class and lower working class. The children’s speech was identified as male or female by judging their voices as rugged-delicate, high-low, masculine-feminine, and rough-smooth by 10 male and 10 female students from Far Eastern University. The findings of the study reveal that children in the middle class are identified as females while children in the lower working class are identified as males. The findings show that male and female inter-raters have slight difference in their perception in identifying the children’s voices. Variation occurs in the average percentage of voice qualities of male and female children in both social classes. The findings clearly show how social class and gender manifest in children’s speech. Keywords: Gender, Social Class, Children’s Speech & Filipino