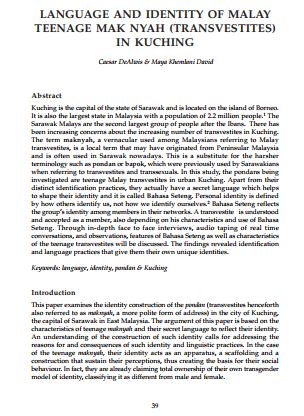 Kuching is the capital of the state of Sarawak and is located on the island of Borneo. It is also the largest state in Malaysia with a population of 2.2 million people.1 The Sarawak Malays are the second largest group of people after the Ibans. There has been increasing concerns about the increasing number of transvestites in Kuching. The term maknyah, a vernacular used among Malaysians referring to Malay transvestites, is a local term that may have originated from Peninsular Malaysia and is often used in Sarawak nowadays. This is a substitute for the harsher terminology such as pondan or bapok, which were previously used by Sarawakians when referring to transvestites and transsexuals. In this study, the pondans being investigated are teenage Malay transvestites in urban Kuching. Apart from their distinct identification practices, they actually have a secret language which helps to shape their identity and it is called Bahasa Seteng. Personal identity is defined by how others identify us, not how we identify ourselves.2 Bahasa Seteng reflects the group’s identity among members in their networks. A transvestite is understood and accepted as a member, also depending on his characteristics and use of Bahasa Seteng. Through in-depth face to face interviews, audio taping of real time conversations, and observations, features of Bahasa Seteng as well as characteristics of the teenage transvestites will be discussed. The findings revealed identification and language practices that give them their own unique identities.