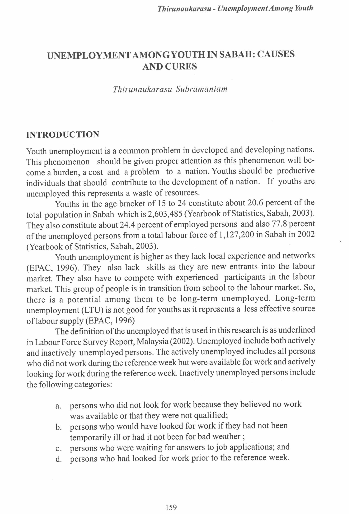 Youth unemployment is a common problem in developed and developing nations. This phenomenon should be given proper attention as this phenomenon will be-come a burden, a cost and a problem to a nation. Youths should be productive individuals that should contribute to the development of a nation. If youths are unemployed this represents a waste of resources. Youths in the age bracket of 15 to 24 constitute about 20.6 percent of the total population in Sabah which is 2,603,485 (Yearbook of Statistics, Sabah, 2003). They also constitute about 24.4 percent of employed persons and also 77.8 percent of the unemployed persons from a total labour force of 1,127,200 in Sabah in 2002 (Yearbook of Statistics, Sabah, 2003). Youth unemployment is higher as they lack local experience and networks (EPAC, 1996). They also lack skills as they are new entrants into the labour market. They also have to compete with experienced participants in the labour market. This group of people is in transition from school to the labour market. So, there is a potential among them to be long-term unemployed. Long-term unemployment (LTU) is not good for youths as it represents a less effective source of labour supply (EPAC, 1996) The definition of the unemployed that is used in this research is as underlined in Labour Force Survey Report, Malaysia (2002). Unemployed include both actively and inactively unemployed persons. The actively unemployed includes all persons who did not work during the reference week but were available for work and actively looking for work during the reference week. Inactively unemployed persons include the following categories: a. persons who did not look for work because they believed no work was available or that they were not qualified; b. persons who would have looked for work if they had not been temporarily ill or had it not been for bad weather ; c. persons who were waiting for answers to job applications; and d. persons who had looked for work prior to the reference week.