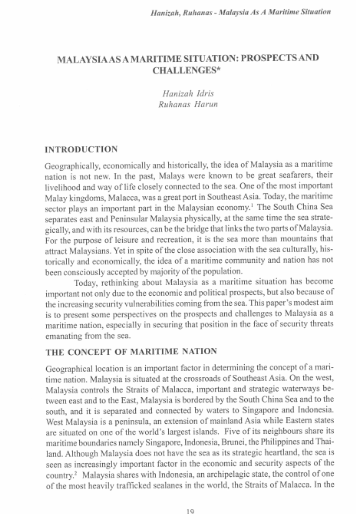 Geographically, economically and historically, the idea of Malaysia as a maritime nation is not new. In the past, Malays were known to be great seafarers, their livelihood and way of life closely connected to the sea. One of the most important Malay kingdoms, Malacca, was a great port in Southeast Asia. Today, the maritime sector plays an important part in the Malaysian economy.' The South China Sea separates east and Peninsular Malaysia physically, at the same time the sea strate-gically, and with its resources, can be the bridge that links the two parts of Malaysia. For the purpose of leisure and recreation, it is the sea more than mountains that attract Malaysians. Yet in spite of the close association with the sea culturally, his-torically and economically, the idea of a maritime community and nation has not been consciously accepted by majority of the population. Today, rethinking about Malaysia as a maritime situation has become important not only due to the economic and political prospects, but also because of the increasing security vulnerabilities coming from the sea. This paper's modest aim is to present some perspectives on the prospects and challenges to Malaysia as a maritime nation, especially in securing that position in the face of security threats emanating from the sea.