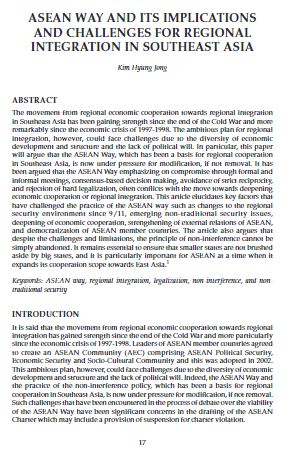 The movement from regional economic cooperation towards regional integration in Southeast Asia has been gaining strength since the end of the Cold War and more remarkably since the economic crisis of 1997-1998. The ambitious plan for regional integration, however, could face challenges due to the diversity of economic development and structure and the lack of political will. In particular, this paper will argue that the ASEAN Way, which has been a basis for regional cooperation in Southeast Asia, is now under pressure for modification, if not removal. It has been argued that the ASEAN Way emphasizing on compromise through formal and informal meetings, consensus-based decision making, avoidance of strict reciprocity, and rejection of hard legalization, often conflicts with the move towards deepening economic cooperation or regional integration. This article elucidates key factors that have challenged the practice of the ASEAN way such as changes to the regional security environment since 9/11, emerging non-traditional security issues, deepening of economic cooperation, strengthening of external relations of ASEAN, and democratization of ASEAN member countries. The article also argues that despite the challenges and limitations, the principle of non-interference cannot be simply abandoned. It remains essential to ensure that smaller states are not brushed aside by big states, and it is particularly important for ASEAN at a time when it expands its cooperation scope towards East Asia.1