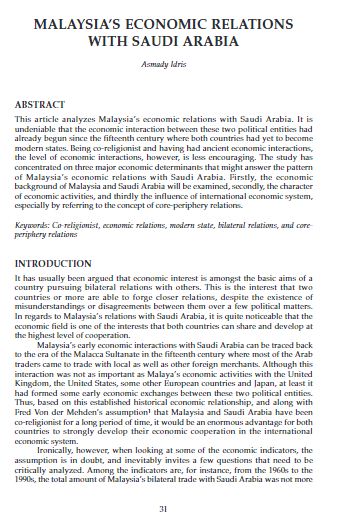 This article analyzes Malaysia’s economic relations with Saudi Arabia. It is undeniable that the economic interaction between these two political entities had already begun since the fifteenth century where both countries had yet to become modern states. Being co-religionist and having had ancient economic interactions, the level of economic interactions, however, is less encouraging. The study has concentrated on three major economic determinants that might answer the pattern of Malaysia’s economic relations with Saudi Arabia. Firstly, the economic background of Malaysia and Saudi Arabia will be examined, secondly, the character of economic activities, and thirdly the influence of international economic system, especially by referring to the concept of core-periphery relations.