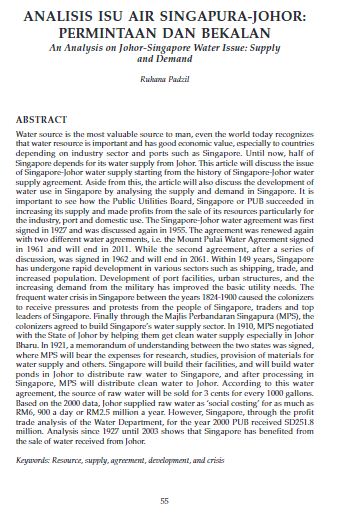 Water source is the most valuable source to man, even the world today recognizes that water resource is important and has good economic value, especially to countries depending on industry sector and ports such as Singapore. Until now, half of Singapore depends for its water supply from Johor. This article will discuss the issue of Singapore-Johor water supply starting from the history of Singapore-Johor water supply agreement. Aside from this, the article will also discuss the development of water use in Singapore by analysing the supply and demand in Singapore. It is important to see how the Public Utilities Board, Singapore or PUB succeeded in increasing its supply and made profits from the sale of its resources particularly for the industry, port and domestic use. The Singapore-Johor water agreement was first signed in 1927 and was discussed again in 1955. The agreement was renewed again with two different water agreements, i.e. the Mount Pulai Water Agreement signed in 1961 and will end in 2011. While the second agreement, after a series of discussion, was signed in 1962 and will end in 2061. Within 149 years, Singapore has undergone rapid development in various sectors such as shipping, trade, and increased population. Development of port facilities, urban structures, and the increasing demand from the military has improved the basic utility needs. The frequent water crisis in Singapore between the years 1824-1900 caused the colonizers to receive pressures and protests from the people of Singapore, traders and top leaders of Singapore. Finally through the Majlis Perbandaran Singapura (MPS), the colonizers agreed to build Singapore’s water supply sector. In 1910, MPS negotiated with the State of Johor by helping them get clean water supply especially in Johor Bharu. In 1921, a memorandum of understanding between the two states was signed, where MPS will bear the expenses for research, studies, provision of materials for water supply and others. Singapore will build their facilities, and will build water ponds in Johor to distribute raw water to Singapore, and after processing in Singapore, MPS will distribute clean water to Johor. According to this water agreement, the source of raw water will be sold for 3 cents for every 1000 gallons. Based on the 2000 data, Johor supplied raw water as ‘social costing’ for as much as RM6, 900 a day or RM2.5 million a year. However, Singapore, through the profit trade analysis of the Water Department, for the year 2000 PUB received SD251.8 million. Analysis since 1927 until 2003 shows that Singapore has benefited from the sale of water received from Johor.