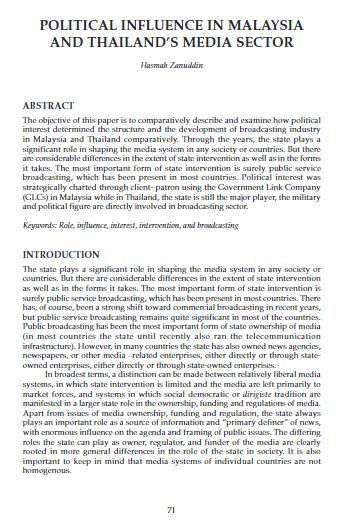 The objective of this paper is to comparatively describe and examine how political interest determined the structure and the development of broadcasting industry in Malaysia and Thailand comparatively. Through the years, the state plays a significant role in shaping the media system in any society or countries. But there are considerable differences in the extent of state intervention as well as in the forms it takes. The most important form of state intervention is surely public service broadcasting, which has been present in most countries. Political interest was strategically charted through client- patron using the Government Link Company (GLCs) in Malaysia while in Thailand, the state is still the major player, the military and political figure are directly involved in broadcasting sector.