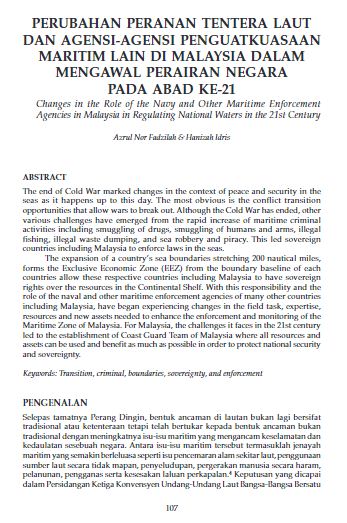 The end of Cold War marked changes in the context of peace and security in the seas as it happens up to this day. The most obvious is the conflict transition opportunities that allow wars to break out. Although the Cold War has ended, other various challenges have emerged from the rapid increase of maritime criminal activities including smuggling of drugs, smuggling of humans and arms, illegal fishing, illegal waste dumping, and sea robbery and piracy. This led sovereign countries including Malaysia to enforce laws in the seas. The expansion of a country’s sea boundaries stretching 200 nautical miles, forms the Exclusive Economic Zone (EEZ) from the boundary baseline of each countries allow these respective countries including Malaysia to have sovereign rights over the resources in the Continental Shelf. With this responsibility and the role of the naval and other maritime enforcement agencies of many other countries including Malaysia, have began experiencing changes in the field task, expertise, resources and new assets needed to enhance the enforcement and monitoring of the Maritime Zone of Malaysia. For Malaysia, the challenges it faces in the 21st century led to the establishment of Coast Guard Team of Malaysia where all resources and assets can be used and benefit as much as possible in order to protect national security and sovereignty.