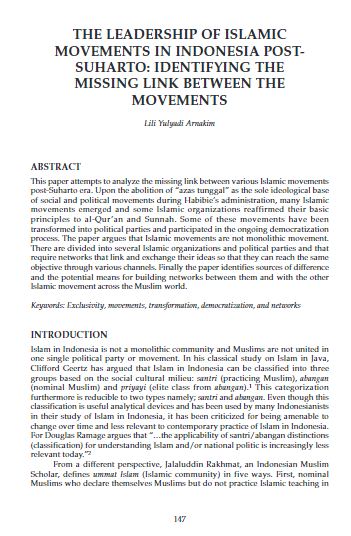 This paper attempts to analyze the missing link between various Islamic movements post-Suharto era. Upon the abolition of “azas tunggal” as the sole ideological base of social and political movements during Habibie’s administration, many Islamic movements emerged and some Islamic organizations reaffirmed their basic principles to al-Qur’an and Sunnah. Some of these movements have been transformed into political parties and participated in the ongoing democratization process. The paper argues that Islamic movements are not monolithic movement. There are divided into several Islamic organizations and political parties and that require networks that link and exchange their ideas so that they can reach the same objective through various channels. Finally the paper identifies sources of difference and the potential means for building networks between them and with the other Islamic movement across the Muslim world.