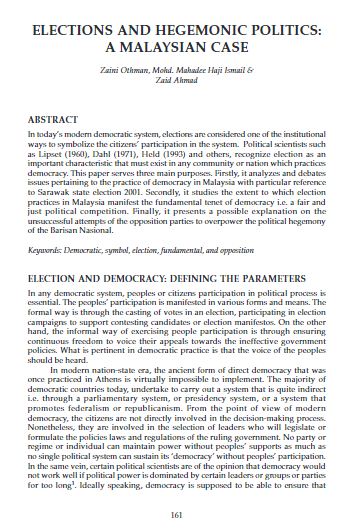 In today’s modern democratic system, elections are considered one of the institutional ways to symbolize the citizens’ participation in the system. Political scientists such as Lipset (1960), Dahl (1971), Held (1993) and others, recognize election as an important characteristic that must exist in any community or nation which practices democracy. This paper serves three main purposes. Firstly, it analyzes and debates issues pertaining to the practice of democracy in Malaysia with particular reference to Sarawak state election 2001. Secondly, it studies the extent to which election practices in Malaysia manifest the fundamental tenet of democracy i.e. a fair and just political competition. Finally, it presents a possible explanation on the unsuccessful attempts of the opposition parties to overpower the political hegemony of the Barisan Nasional.