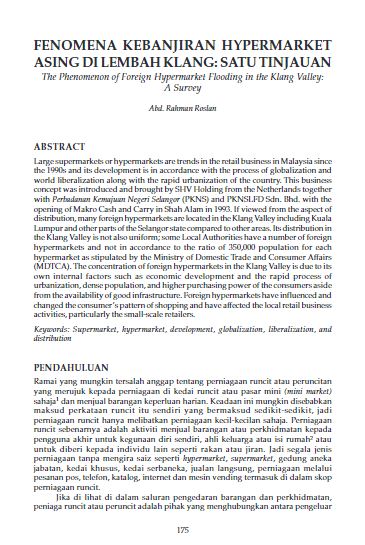 Large supermarkets or hypermarkets are trends in the retail business in Malaysia since the 1990s and its development is in accordance with the process of globalization and world liberalization along with the rapid urbanization of the country. This business concept was introduced and brought by SHV Holding from the Netherlands together with Perbadanan Kemajuan Negeri Selangor (PKNS) and PKNSLFD Sdn. Bhd. with the opening of Makro Cash and Carry in Shah Alam in 1993. If viewed from the aspect of distribution, many foreign hypermarkets are located in the Klang Valley including Kuala Lumpur and other parts of the Selangor state compared to other areas. Its distribution in the Klang Valley is not also uniform; some Local Authorities have a number of foreign hypermarkets and not in accordance to the ratio of 350,000 population for each hypermarket as stipulated by the Ministry of Domestic Trade and Consumer Affairs (MDTCA). The concentration of foreign hypermarkets in the Klang Valley is due to its own internal factors such as economic development and the rapid process of urbanization, dense population, and higher purchasing power of the consumers aside from the availability of good infrastructure. Foreign hypermarkets have influenced and changed the consumer’s pattern of shopping and have affected the local retail business activities, particularly the small-scale retailers.