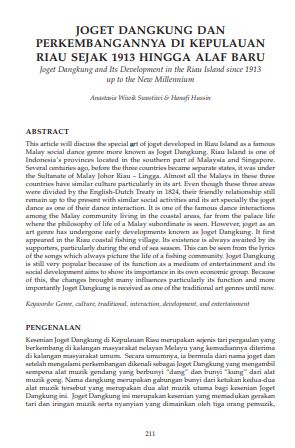 This article will discuss the special art of joget developed in Riau Island as a famous Malay social dance genre more known as Joget Dangkung. Riau Island is one of Indonesia’s provinces located in the southern part of Malaysia and Singapore. Several centuries ago, before the three countries became separate states, it was under the Sultanate of Malay Johor Riau – Lingga. Almost all the Malays in these three countries have similar culture particularly in its art. Even though these three areas were divided by the English-Dutch Treaty in 1824, their friendly relationship still remain up to the present with similar social activities and its art specially the joget dance as one of their dance interaction. It is one of the famous dance interactions among the Malay community living in the coastal areas, far from the palace life where the philosophy of life of a Malay subordinate is seen. However, joget as an art genre has undergone early developments known as Joget Dangkung. It first appeared in the Riau coastal fishing village. Its existence is always awaited by its supporters, particularly during the end of sea season. This can be seen from the lyrics of the songs which always picture the life of a fishing community. Joget Dangkung is still very popular because of its function as a medium of entertainment and its social development aims to show its importance in its own economic group. Because of this, the changes brought many influences particularly its function and more importantly Joget Dangkung is received as one of the traditional art genres until now.