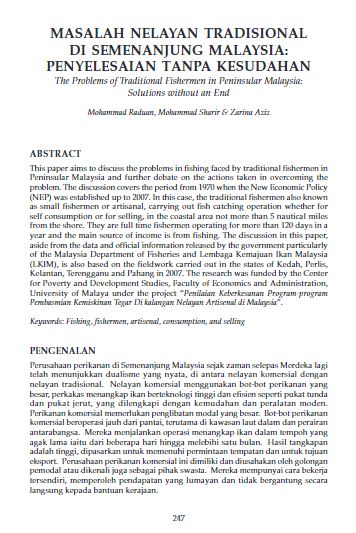 This paper aims to discuss the problems in fishing faced by traditional fishermen in Peninsular Malaysia and further debate on the actions taken in overcoming the problem. The discussion covers the period from 1970 when the New Economic Policy (NEP) was established up to 2007. In this case, the traditional fishermen also known as small fishermen or artisanal, carrying out fish catching operation whether for self consumption or for selling, in the coastal area not more than 5 nautical miles from the shore. They are full time fishermen operating for more than 120 days in a year and the main source of income is from fishing. The discussion in this paper, aside from the data and official information released by the government particularly of the Malaysia Department of Fisheries and Lembaga Kemajuan Ikan Malaysia (LKIM), is also based on the fieldwork carried out in the states of Kedah, Perlis, Kelantan, Terengganu and Pahang in 2007. The research was funded by the Center for Poverty and Development Studies, Faculty of Economics and Administration, University of Malaya under the project â€œPenilaian Keberkesanan Program-program Pembasmian Kemiskinan Tegar Di kalangan Nelayan Artisenal di Malaysiaâ€.