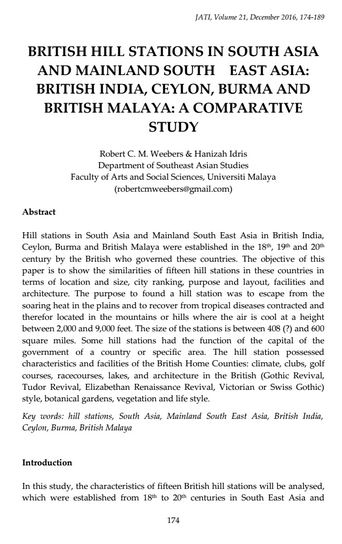 Hill stations in South Asia and Mainland South East Asia in British India, Ceylon, Burma and British Malaya were established in the 18th, 19th and 20th century by the British who governed these countries. The objective of this paper is to show the similarities of fifteen hill stations in these countries in terms of location and size, city ranking, purpose and layout, facilities and architecture. The purpose to found a hill station was to escape from the soaring heat in the plains and to recover from tropical diseases contracted and therefor located in the mountains or hills where the air is cool at a height between 2,000 and 9,000 feet. The size of the stations is between 408 (?) and 600 square miles. Some hill stations had the function of the capital of the government of a country or specific area. The hill station possessed characteristics and facilities of the British Home Counties: climate, clubs, golf courses, racecourses, lakes, and architecture in the British (Gothic Revival, Tudor Revival, Elizabethan Renaissance Revival, Victorian or Swiss Gothic) style, botanical gardens, vegetation and life style.