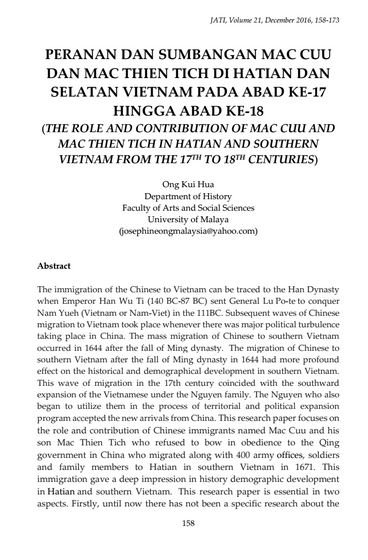 The immigration of the Chinese to Vietnam can be traced to the Han Dynasty when Emperor Han Wu Ti (140 BC-87 BC) sent General Lu Po-te to conquer Nam Yueh (Vietnam or Nam-Viet) in the 111BC. Subsequent waves of Chinese migration to Vietnam took place whenever there was major political turbulence taking place in China. The mass migration of Chinese to southern Vietnam occurred in 1644 after the fall of Ming dynasty. The migration of Chinese to southern Vietnam after the fall of Ming dynasty in 1644 had more profound effect on the historical and demographical development in southern Vietnam. This wave of migration in the 17th century coincided with the southward expansion of the Vietnamese under the Nguyen family. The Nguyen who also began to utilize them in the process of territorial and political expansion program accepted the new arrivals from China. This research paper focuses on the role and contribution of Chinese immigrants named Mac Cuu and his son Mac Thien Tich who refused to bow in obedience to the Qing government in China who migrated along with 400 army offices, soldiers and family members to Hatian in southern Vietnam in 1671. This immigration gave a deep impression in history demographic development in Hatian and southern Vietnam. This research paper is essential in two aspects. Firstly, until now there has not been a specific research about the Ong Kui Hua 160 settlements of the Chinese people in Hatian. Secondly, this research demonstrates the contribution of Mac Cuu and Mac Thien Tich in Hatien in the 17 century and 18 century in the effort to assist the Nguyen rulers to achieve their aim of widening their power in southern Vietnam. This research paper will furnish a new dimension to the history of the Chinese people in Hatien particularly and to Vietnamese history in general. From the point of resource usage, the first Chinese resource such as Hai Wai Ji Shi (Overseas National Record), An Nam Xian Shi Yong (Ten Scenarios Hatien, Annam), Ha Tien Tran Hiep Mac Thi Gia Pha (Genealogy of the Mac Family in Hatien) dan Gia Dinh Thanh Thong Chi (Gia Dinh History) were referred. Meanwhile, the Vietnamese documents, which have been published in Su Hoc (Historical Studies), will also be reference materials. In addition, fieldwork was done at the tomb and graves of Mac Cuu and Mac Thien Tich as well as Mac family mausoleum at Hatien, Delta Mekong. Keywords: , , ,