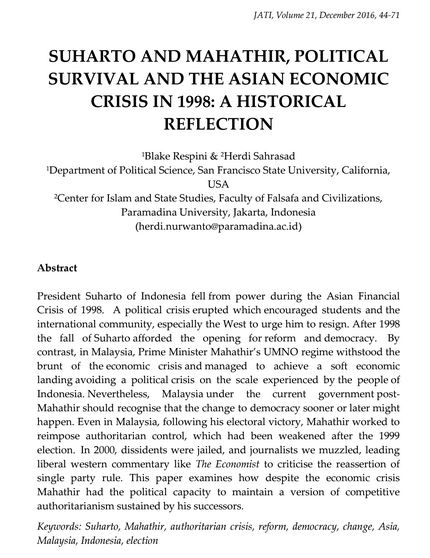 President Suharto of Indonesia fell from power during the Asian Financial Crisis of 1998. A political crisis erupted which encouraged students and the international community, especially the West to urge him to resign. After 1998 the fall of Suharto afforded the opening for reform and democracy. By contrast, in Malaysia, Prime Minister Mahathir’s UMNO regime withstood the brunt of the economic crisis and managed to achieve a soft economic landing avoiding a political crisis on the scale experienced by the people of Indonesia. Nevertheless, Malaysia under the current government postMahathir should recognise that the change to democracy sooner or later might happen. Even in Malaysia, following his electoral victory, Mahathir worked to reimpose authoritarian control, which had been weakened after the 1999 election. In 2000, dissidents were jailed, and journalists we muzzled, leading liberal western commentary like The Economist to criticise the reassertion of single party rule. This paper examines how despite the economic crisis Mahathir had the political capacity to maintain a version of competitive authoritarianism sustained by his successors.