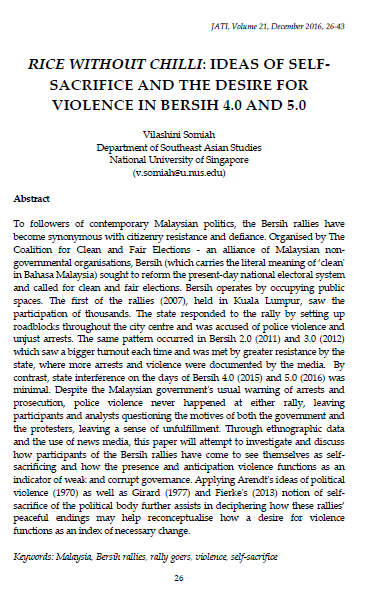 To followers of contemporary Malaysian politics, the Bersih rallies have become synonymous with citizenry resistance and defiance. Organised by The Coalition for Clean and Fair Elections - an alliance of Malaysian nongovernmental organisations, Bersih (which carries the literal meaning of ‘clean' in Bahasa Malaysia) sought to reform the present-day national electoral system and called for clean and fair elections. Bersih operates by occupying public spaces. The first of the rallies (2007), held in Kuala Lumpur, saw the participation of thousands. The state responded to the rally by setting up roadblocks throughout the city centre and was accused of police violence and unjust arrests. The same pattern occurred in Bersih 2.0 (2011) and 3.0 (2012) which saw a bigger turnout each time and was met by greater resistance by the state, where more arrests and violence were documented by the media. By contrast, state interference on the days of Bersih 4.0 (2015) and 5.0 (2016) was minimal. Despite the Malaysian government's usual warning of arrests and prosecution, police violence never happened at either rally, leaving participants and analysts questioning the motives of both the government and the protesters, leaving a sense of unfulfillment. Through ethnographic data and the use of news media, this paper will attempt to investigate and discuss how participants of the Bersih rallies have come to see themselves as selfsacrificing and how the presence and anticipation violence functions as an indicator of weak and corrupt governance. Applying Arendt's ideas of political violence (1970) as well as Girard (1977) and Fierke's (2013) notion of selfsacrifice of the political body further assists in deciphering how these rallies’ peaceful endings may help reconceptualise how a desire for violence functions as an index of necessary change. Keywords: Malaysia, Bersih rallies, rally goers, violence, self-sacrifice