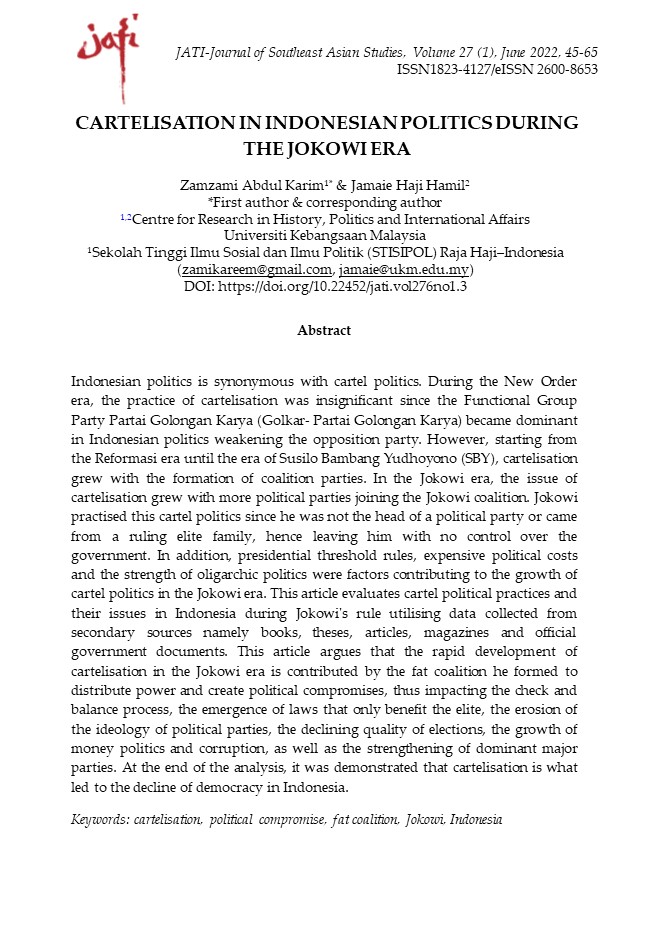 Indonesian politics is synonymous with cartel politics. During the New Order era, the practice of cartelisation was insignificant since the Functional Group Party Partai Golongan Karya (Golkar- Partai Golongan Karya) became dominant in Indonesian politics weakening the opposition party. However, starting from the Reformasi era until the era of Susilo Bambang Yudhoyono (SBY), cartelisation grew with the formation of coalition parties. In the Jokowi era, the issue of cartelisation grew with more political parties joining the Jokowi coalition. Jokowi practised this cartel politics since he was not the head of a political party or came from a ruling elite family, hence leaving him with no control over the government. In addition, presidential threshold rules, expensive political costs and the strength of oligarchic politics were factors contributing to the growth of cartel politics in the Jokowi era. This article evaluates cartel political practices and their issues in Indonesia during Jokowi's rule utilising data collected from secondary sources namely books, theses, articles, magazines and official government documents. This article argues that the rapid development of cartelisation in the Jokowi era is contributed by the fat coalition he formed to distribute power and create political compromises, thus impacting the check and balance process, the emergence of laws that only benefit the elite, the erosion of the ideology of political parties, the declining quality of elections, the growth of money politics and corruption, as well as the strengthening of dominant major parties. At the end of the analysis, it was demonstrated that cartelisation is what led to the decline of democracy in Indonesia.