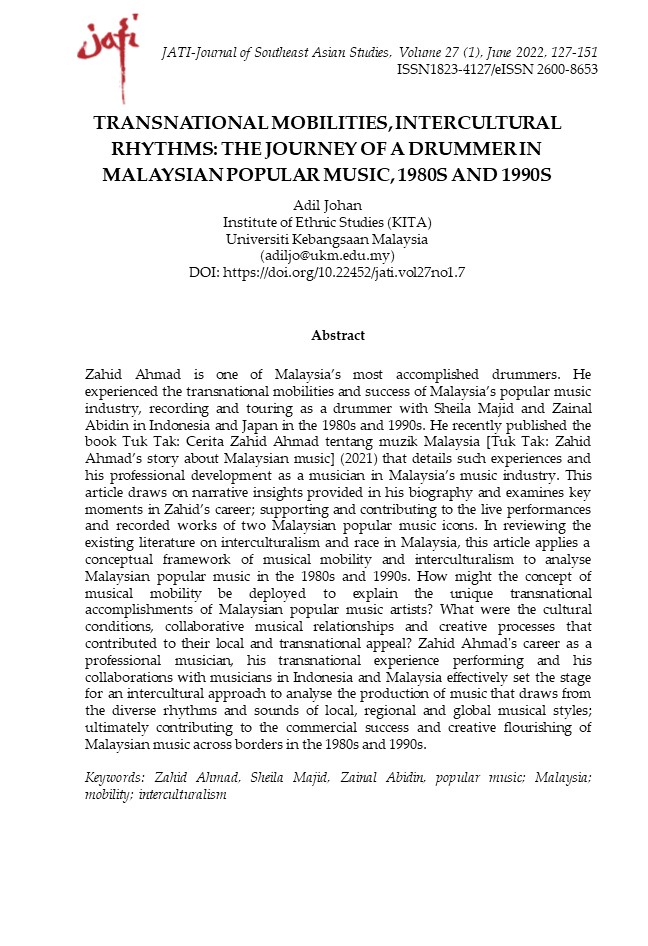 Zahid Ahmad is one of Malaysia’s most accomplished drummers. He experienced the transnational mobilities and success of Malaysia’s popular music industry, recording and touring as a drummer with Sheila Majid and Zainal Abidin in Indonesia and Japan in the 1980s and 1990s. He recently published the book Tuk Tak: Cerita Zahid Ahmad tentang muzik Malaysia [Tuk Tak: Zahid Ahmad’s story about Malaysian music] (2021) that details such experiences and his professional development as a musician in Malaysia’s music industry. This article draws on narrative insights provided in his biography and examines key moments in Zahid’s career; supporting and contributing to the live performances and recorded works of two Malaysian popular music icons. In reviewing the existing literature on interculturalism and race in Malaysia, this article applies a conceptual framework of musical mobility and interculturalism to analyse Malaysian popular music in the 1980s and 1990s. How might the concept of musical mobility be deployed to explain the unique transnational accomplishments of Malaysian popular music artists? What were the cultural conditions, collaborative musical relationships and creative processes that contributed to their local and transnational appeal? Zahid Ahmad's career as a professional musician, his transnational experience performing and his collaborations with musicians in Indonesia and Malaysia effectively set the stage for an intercultural approach to analyse the production of music that draws from the diverse rhythms and sounds of local, regional and global musical styles; ultimately contributing to the commercial success and creative flourishing of Malaysian music across borders in the 1980s and 1990s.