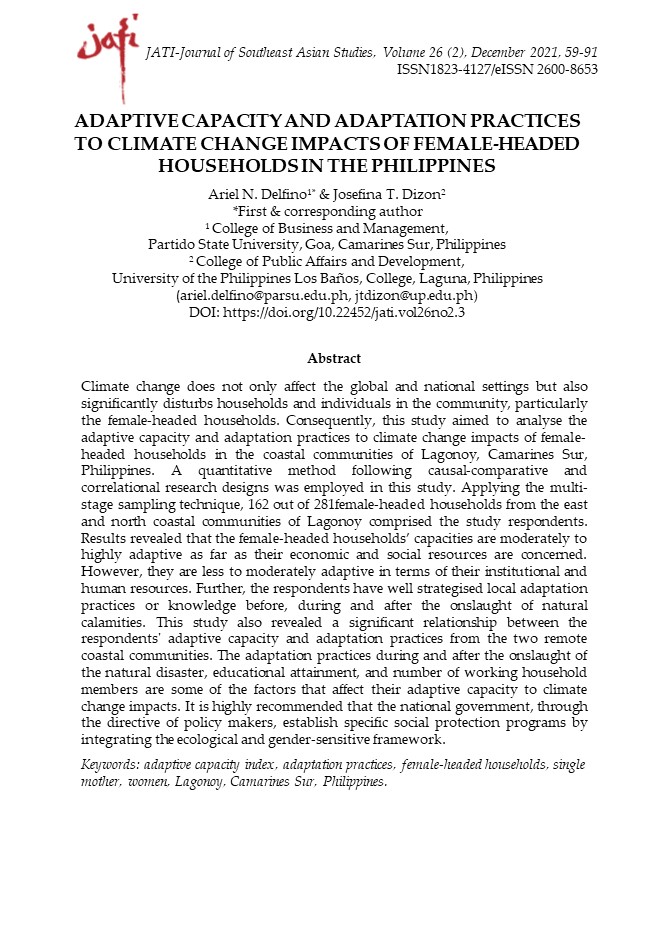 Climate change does not only affect the global and national settings but also significantly disturbs households and individuals in the community, particularly the female-headed households. Consequently, this study aimed to analyse the adaptive capacity and adaptation practices to climate change impacts of female-headed households in the coastal communities of Lagonoy, Camarines Sur, Philippines. A quantitative method following causal-comparative and correlational research designs was employed in this study. Applying the multi-stage sampling technique, 162 out of 281female-headed households from the east and north coastal communities of Lagonoy comprised the study respondents. Results revealed that the female-headed households’ capacities are moderately to highly adaptive as far as their economic and social resources are concerned. However, they are less to moderately adaptive in terms of their institutional and human resources. Further, the respondents have well strategised local adaptation practices or knowledge before, during and after the onslaught of natural calamities. This study also revealed a significant relationship between the respondents' adaptive capacity and adaptation practices from the two remote coastal communities. The adaptation practices during and after the onslaught of the natural disaster, educational attainment, and number of working household members are some of the factors that affect their adaptive capacity to climate change impacts. It is highly recommended that the national government, through the directive of policy makers, establish specific social protection programs by integrating the ecological and gender-sensitive framework.