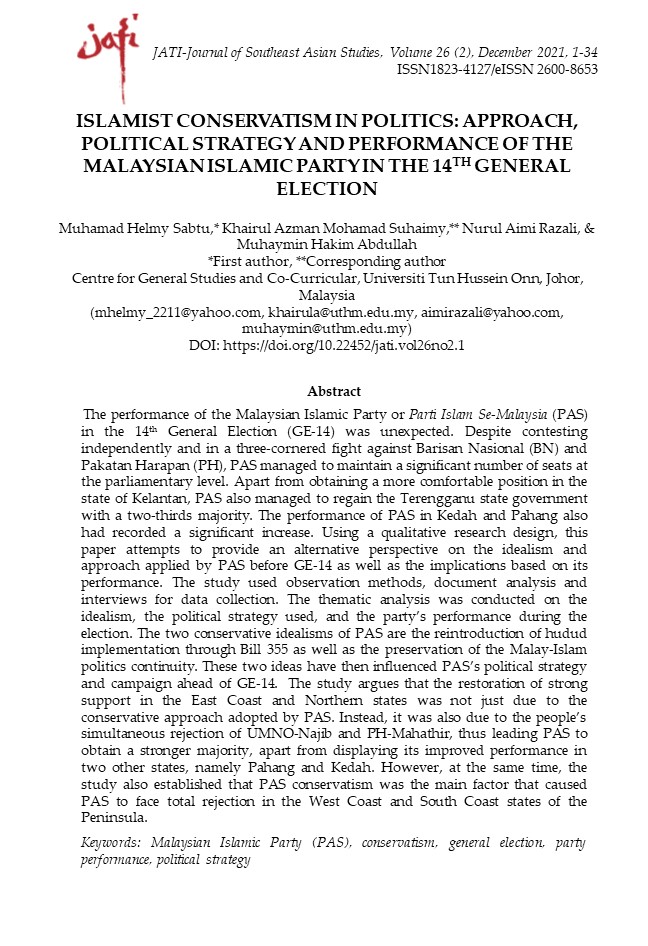 The performance of the Malaysian Islamic Party or Parti Islam Se-Malaysia (PAS) in the 14th General Election (GE-14) was unexpected. Despite contesting independently and in a three-cornered fight against Barisan Nasional (BN) and Pakatan Harapan (PH), PAS managed to maintain a significant number of seats at the parliamentary level. Apart from obtaining a more comfortable position in the state of Kelantan, PAS also managed to regain the Terengganu state government with a two-thirds majority. The performance of PAS in Kedah and Pahang also had recorded a significant increase. Using a qualitative research design, this paper attempts to provide an alternative perspective on the idealism and approach applied by PAS before GE-14 as well as the implications based on its performance. The study used observation methods, document analysis and interviews for data collection. The thematic analysis was conducted on the idealism, the political strategy used, and the party’s performance during the election. The two conservative idealisms of PAS are the reintroduction of hudud implementation through Bill 355 as well as the preservation of the Malay-Islam politics continuity. These two ideas have then influenced PAS’s political strategy and campaign ahead of GE-14.  The study argues that the restoration of strong support in the East Coast and Northern states was not just due to the conservative approach adopted by PAS. Instead, it was also due to the people’s simultaneous rejection of UMNO-Najib and PH-Mahathir, thus leading PAS to obtain a stronger majority, apart from displaying its improved performance in two other states, namely Pahang and Kedah. However, at the same time, the study also established that PAS conservatism was the main factor that caused PAS to face total rejection in the West Coast and South Coast states of the Peninsula.