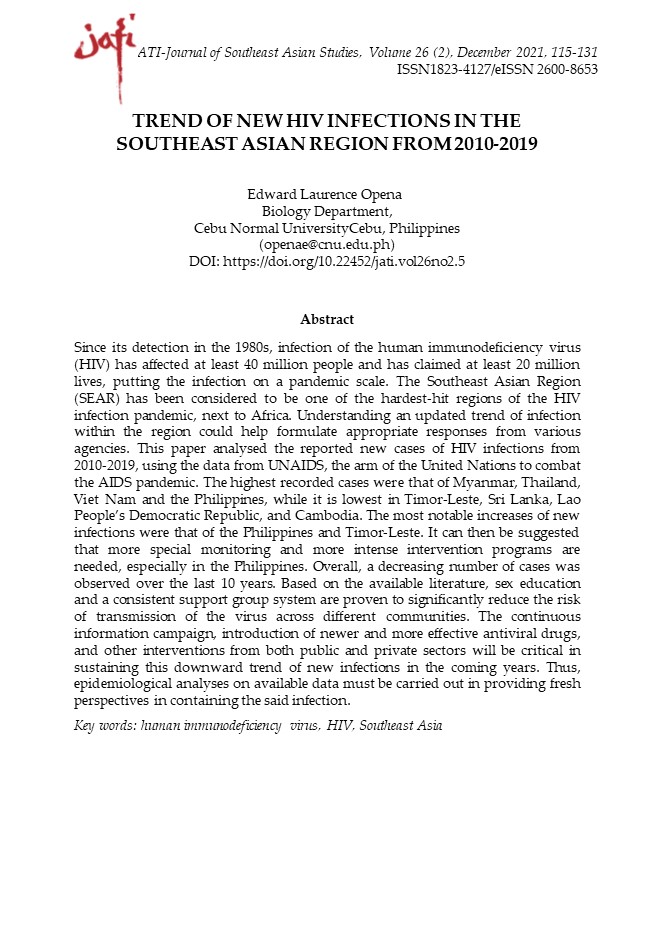 Since its detection in the 1980s, infection of the human immunodeficiency virus (HIV) has affected at least 40 million people and has claimed at least 20 million lives, putting the infection on a pandemic scale. The Southeast Asian Region (SEAR) has been considered to be one of the hardest-hit regions of the HIV infection pandemic, next to Africa. Understanding an updated trend of infection within the region could help formulate appropriate responses from various agencies. This paper analysed the reported new cases of HIV infections from 2010-2019, using the data from UNAIDS, the arm of the United Nations to combat the AIDS pandemic. The highest recorded cases were that of Myanmar, Thailand, Viet Nam and the Philippines, while it is lowest in Timor-Leste, Sri Lanka, Lao People’s Democratic Republic, and Cambodia. The most notable increases of new infections were that of the Philippines and Timor-Leste. It can then be suggested that more special monitoring and more intense intervention programs are needed, especially in the Philippines. Overall, a decreasing number of cases was observed over the last 10 years. Based on the available literature, sex education and a consistent support group system are proven to significantly reduce the risk of transmission of the virus across different communities. The continuous information campaign, introduction of newer and more effective antiviral drugs, and other interventions from both public and private sectors will be critical in sustaining this downward trend of new infections in the coming years. Thus, epidemiological analyses on available data must be carried out in providing fresh perspectives in containing the said infection.