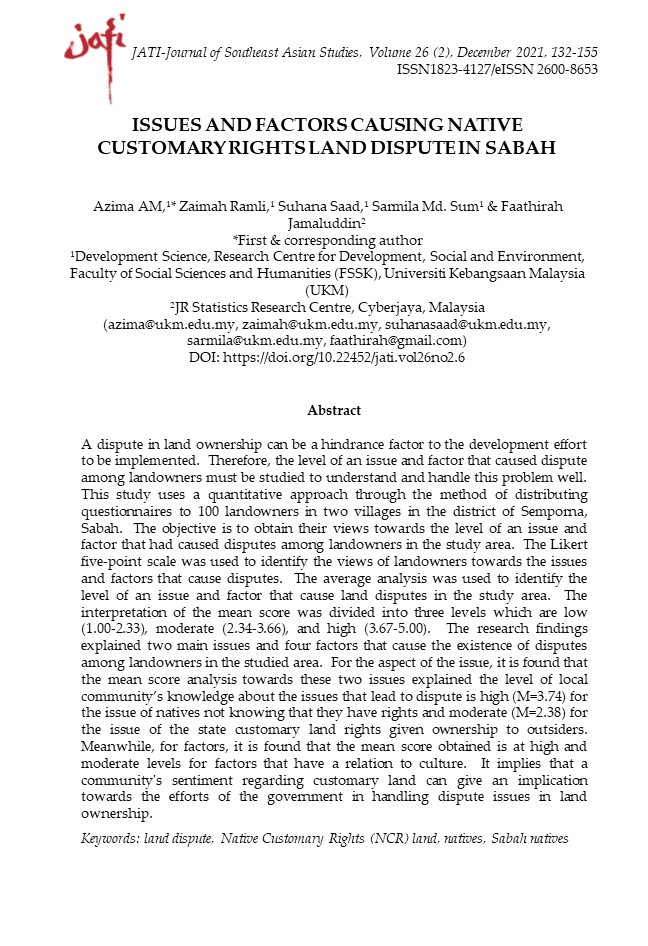 A dispute in land ownership can be a hindrance factor to the development effort to be implemented. Therefore, the level of an issue and factor which caused dispute among landowners must be studied, so that this problem can be understood and handled well. This study uses a quantitative approach through the method of distributing questionnaires to 100 landowners in two villages in the district of Semporna, Sabah. The objective is to obtain their views towards the level of an issue and factor that had caused disputes among landowners in the study area. The Likert five-point scale was used to identify the views of landowners towards the issues and factors that cause disputes. The average analysis was used to identify the level of an issue and factor that cause land disputes in the study area. The interpretation of the mean score was divided into three levels which are, low (1.00-2.33), moderate (2.34-3.66), and high (3.67-5.00). The research findings explained that there are two main issues and four factors that cause the existence of disputes among landowners in the studied area. For the aspect of the issue, it is found that the mean score analysis towards these two issues explained the level of local community’s knowledge about the issues that lead to dispute is high (M=3.74) for the issue of natives not knowing that they have rights and moderate (M=2.38) for the issue of the state customary land rights given ownership to outsiders. Meanwhile, for factors, it is found that for factors that have a relation to culture, the mean score obtained is at high and moderate levels. It implies that a community's sentiment regarding customary land can give an implication towards the efforts of the government in handling dispute issues in land ownership.