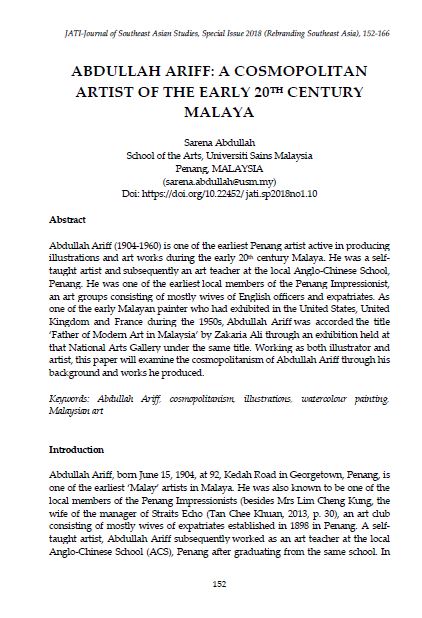 Abdullah Ariff (1904-1960) is one of the earliest Penang artist active in producing illustrations and art works during the early 20th century Malaya. He was a self-taught artist and subsequently an art teacher at the local Anglo-Chinese School, Penang. He was one of the earliest local members of the Penang Impressionist, an art groups consisting of mostly wives of English officers and expatriates. As one of the early Malayan painter who had exhibited in the United States, United Kingdom and France during the 1950s, Abdullah Ariff was accorded the title ‘Father of Modern Art in Malaysia’ by Zakaria Ali through an exhibition held at that National Arts Gallery under the same title. Working as both illustrator and artist, this paper will examine the cosmopolitanism of Abdullah Ariff through his background and works he produced.