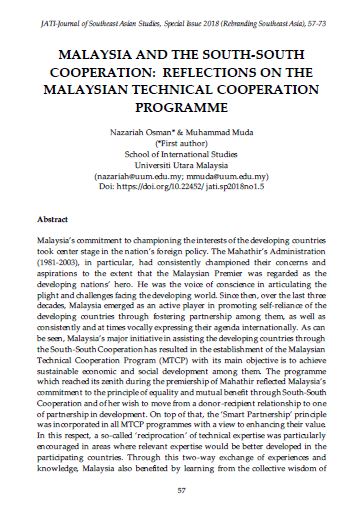 Malaysia’s commitment to championing the interests of the developing countries took center stage in the nation’s foreign policy. The Mahathir’s Administration (1981-2003), in particular, had consistently championed their concerns and aspirations to the extent that the Malaysian Premier was regarded as the developing nations’ hero. He was the voice of conscience in articulating the plight and challenges facing the developing world. Since then, over the last three decades, Malaysia emerged as an active player in promoting self-reliance of the developing countries through fostering partnership among them, as well as consistently and at times vocally expressing their agenda internationally. As can be seen, Malaysia’s major initiative in assisting the developing countries through the South-South Cooperation has resulted in the establishment of the Malaysian Technical Cooperation Program (MTCP) with its main objective is to achieve sustainable economic and social development among them. The programme which reached its zenith during the premiership of Mahathir reflected Malaysia’s commitment to the principle of equality and mutual benefit through South-South Cooperation and of her wish to move from a donor-recipient relationship to one of partnership in development. On top of that, the ‘Smart Partnership’ principle was incorporated in all MTCP programmes with a view to enhancing their value. In this respect, a so-called ‘reciprocation’ of technical expertise was particularly encouraged in areas where relevant expertise would be better developed in the participating countries. Through this two-way exchange of experiences and knowledge, Malaysia also benefited by learning from the collective wisdom of other developing countries. As a result, such bilateral exchanges will spawn a ‘win-win situation’ for all parties. To date, Malaysia has allocated some USD200 million (RM880 million) to this programme with 29,000 beneficiaries from 143 developing countries. Speaking at a roundtable meeting for the South-South Cooperation nations at the 70th Session of the United Nations General assembly, Prime Minister Datuk Seri Najib Razak gave his assurance that Malaysia would continue to champion the developing nations’ interests even though Malaysia is still gearing toward becoming a fully developed nation by 2020. To sum up, this paper examines Malaysia’s strong commitment to the South-South cooperation and development as reflected in the MTCP programme. By doing so, Malaysia will be known and remembered for its dedication to assisting fellow developing nations that are too keen to emulate Malaysia’s socio-economic success.