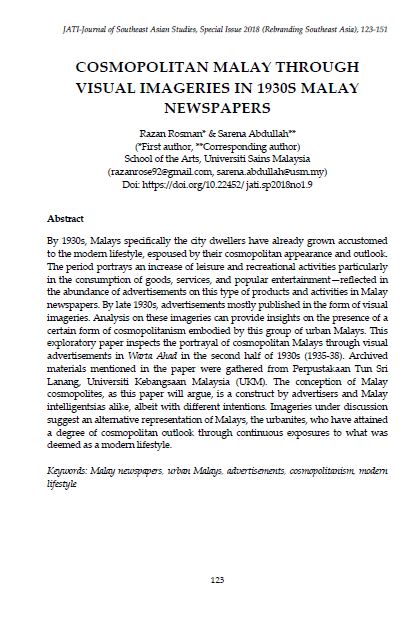 By 1930s, Malays specifically the city dwellers have already grown accustomed to the modern lifestyle, espoused by their cosmopolitan appearance and outlook. The period portrays an increase of leisure and recreational activities particularly in the consumption of goods, services, and popular entertainmentâ€”reflected in the abundance of advertisements on this type of products and activities in Malay newspapers. By late 1930s, advertisements mostly published in the form of visual imageries. Analysis on these imageries can provide insights on the presence of a certain form of cosmopolitanism embodied by this group of urban Malays. This exploratory paper inspects the portrayal of cosmopolitan Malays through visual advertisements in Warta Ahad in the second half of 1930s (1935-38). Archived materials mentioned in the paper were gathered from Perpustakaan Tun Sri Lanang, Universiti Kebangsaan Malaysia (UKM). The conception of Malay cosmopolites, as this paper will argue, is a construct by advertisers and Malay intelligentsias alike, albeit with different intentions. Imageries under discussion suggest an alternative representation of Malays, the urbanites, who have attained a degree of cosmopolitan outlook through continuous exposures to what was deemed as a modern lifestyle.