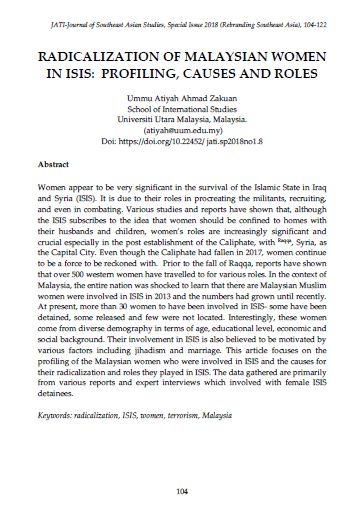 Women appears to be very significant in the survival of ISIS. It is due to their roles in procreating the militants, recruiting, and even in combating. Various studies and reports have shown that, although the ISIS subscribes to the idea that women should be confined at homes with their husbands and children, women’s roles are increasingly significant and crucial especially in the post establishment of the Caliphate, with Raqqa, Syria, as the Capital City. Even though the Caliphate had fallen in 2017, women continue to be a force to be reckoned.  Prior the fall of Raqqa, reports have shown that over 500 western women have travelled to for various roles. In the context of Malaysia, the entire nation was shocked to learn that there are Malaysian women who involved in ISIS in 2013 and the numbers are growing until now. At present, more than 30 women have been identified involving in ISIS- some have been detained, released and few are not being able to be located. Interestingly, these women come from diverse demography such as age, educational level, economic and social background. Their involvement in ISIS also are motivated by various factors including for jihadism and for marriage. This article focuses on the profiling of the Malaysian women who involved in ISIS and the causes of their radicalization and roles they played in ISIS. The data gathered are primarily from various reports and expert interviews who involved with female ISIS detainees.