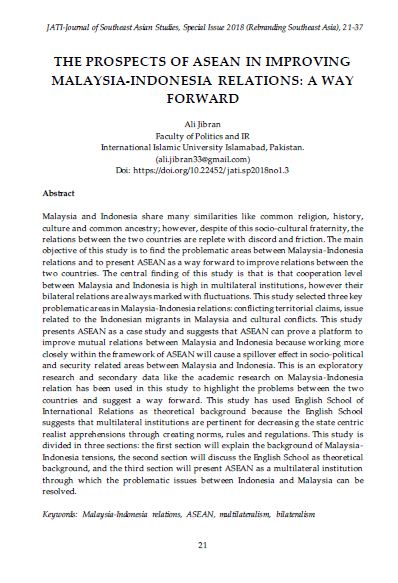 Malaysia and Indonesia share many similarities like common religion, history, culture and common ancestry; however, despite of this socio-cultural fraternity, the relations between the two countries are replete with discord and friction. The main objective of this study is to find the problematic areas between Malaysia-Indonesia relations and to present ASEAN as a way forward to improve relations between the two countries. The central finding of this study is that is that cooperation level between Malaysia and Indonesia is high in multilateral institutions, however their bilateral relations are always marked with fluctuations. This study selected three key problematic areas in Malaysia-Indonesia relations: conflicting territorial claims, issue related to the Indonesian migrants in Malaysia and cultural conflicts. This study presents ASEAN as a case study and suggests that ASEAN can prove a platform to improve mutual relations between Malaysia and Indonesia because working more closely within the framework of ASEAN will cause a spillover effect in socio-political and security related areas between Malaysia and Indonesia. This is an exploratory research and secondary data like the academic research on Malaysia-Indonesia relation has been used in this study to highlight the problems between the two countries and suggest a way forward. This study has used English School of International Relations as theoretical background because the English School suggests that multilateral institutions are pertinent for decreasing the state centric realist apprehensions through creating norms, rules and regulations. This study is divided in three sections: the first section will explain the background of Malaysia-Indonesia tensions, the second section will discuss the English School as theoretical background, and the third section will present ASEAN as a multilateral institution through which the problematic issues between Indonesia and Malaysia can be resolved.