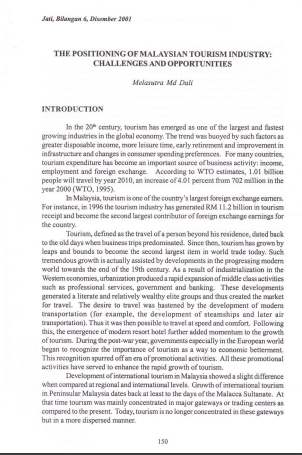 ln the 20th century tourism has emerged as one of the largest and fastest growing industries in the global economy. The trend was buoyed by such factors as greater disposable income, more leisure time, early retirement and improvement in infrastructure and changes in consumer spending preferences. For many countries, tourism expenditure has become an important source of business activity: income, employment and foreign exchange. According to WTO estimates, 1.01 billion people will travel by year 2010, an increase of 4.01 percent from 702 million in the year 2000 (WTO, 1995). In Malaysia, tourism is one of the country's largest foreign exchange earners. For instance, in 1996 the tourism industry has generated RM 11.2 billion in tourism receipt and become the second largest contributor of foreign exchange earnings for the country. Tourism, defined as the travel of a person beyond his residence, dated back to the old days when business trips predominated. Since then, tourism has grown by leaps and bounds to become the second largest item in world trade today. Such tremendous growth is actually assisted by developments in the progressing modern world towards the end of the 19th century. As a result of industrialization in the Westem economies, urbanization produced a rapid expansion of middle class activities such as professional services, government and banking. These developments generated a literate and relatively wealthy elite groups and thus created the market for travel. The desire to travel was hastened by the development of modern transportation (for example, the development of steamships and later air transportation). Thus it was then possible to travel at speed and comfort. Following this, the emergence of modern resort hotel further added momentum to the growth of tourism. During the post-war year, governments especially in the European world began to recognize the importance of tourism as a way to economic betterment. This recognition spurred off an era of promotional activities. All these promotional activities have served to enhance the rapid growth of tourism.