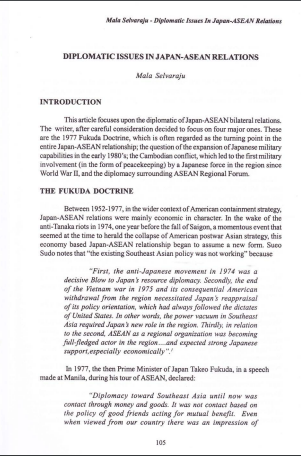 This article focuses upon the diplomatic of Japan-ASEAN bilateral relations. The writer, after careful consideration decided to focus on four major ones. These are the 1977 Fukuda Doctrine, which is often regarded as the turning point in the entire Japan-ASEAN relationship; the question of the expansion of Japanese military capabilities in the early 1980's; the Cambodian conflict, which led to the first military involvement (in the form of peacekeeping) by a Japanese force in the region since World War II, and the diplomacy surrounding ASEAN Regional Forum.