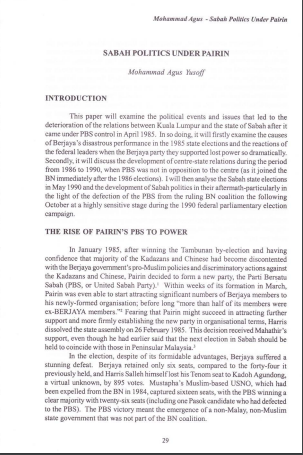 This paper will examine the political events and issues that led to the deterioration of the relations between Kuala Lumpur and the state of Sabah after it came under PBS control in April 1985. In so doing, it will firstly examine the causes of Berjaya's disastrous performance in the 1985 state elections and the reactions of the federal leaders when the Berjaya party they supported lost power so dramatically. Secondly, it will discuss the development of centre-state relations during the period from 1986 to 1990, when PBS was not in opposition to the centre (as it joined the BN immediately after the 1986 elections). I will then analyse the Sabah state elections in May 1990 and the development of Sabah politics in their aftermath-particularly in the light of the defection of the PBS from the ruling BN coalition the following October at a highly sensitive stage during the 1990 federal parliamentary election campaign.