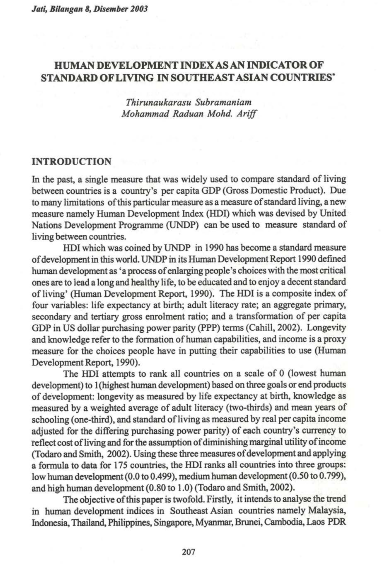 In the past, a single measure that was widely used to compare standard of living between countries is a country's per capita GDP (Gross Domestic Product). Due to many limitations of this particular measure as a measure of standard living, a new measure namely Human Development Index (HDI) which was devised by United Nations Development Programme (UNDP) can be used to measure standard of living between countries. HDI which was coined by UNDP in 1990 has become a standard measure of development in this world. UNDP in its Human Development Report 1990 defined human development as 'a process of enlarging people's choices with the most critical ones are to lead a long and healthy life, to be educated and to enjoy a decent standard of living' (Human Development Report, 1990). The HDI is a composite index of four variables: life expectancy at birth; adult literacy rate; an aggregate primary, secondary and tertiary gross enrollment ration; and a transformation of per capita GDP in US dollar purchasing power parity (PPP) terms (Cahill, 2002). Longevity and knowledge refer to the formation of human capabilities, and income is a proxy measure for the choices people have in putting their capabilities to use (Human Development Report, 1990).