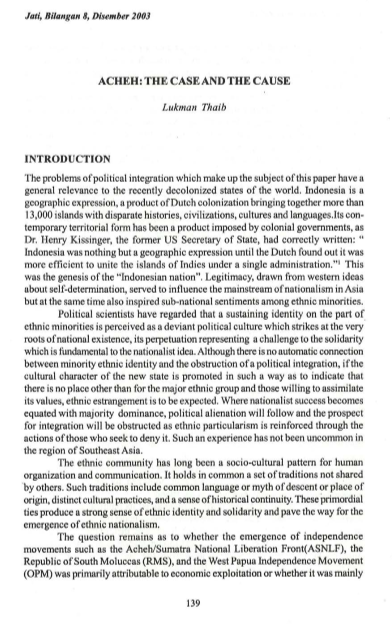 The problems of political integration which make up the subject of this paper have a general relevance to the recently decolonized states of the world. Indonesia is a geographic expression, a product of Dutch colonization bringing together more than 13,000 islands with disparate histories, civilizations, cultures and languages. Its con-temporary territorial from has been a product imposed by colonial governments, as Dr. Henry Kissinger, the former US Secretary of State, had correctly written: "Indonesia was nothing but a geographic expression until the Dutch found out it was more efficient to unite the islands of Indies under a single administration." This was the genesis of the "Indonesian nation". Legitimacy, drawn from western ideas about self-determination, served to influence the mainstream of nationalism in Asia but at the same time also inspired sub-national sentiments among ethnic minorities.