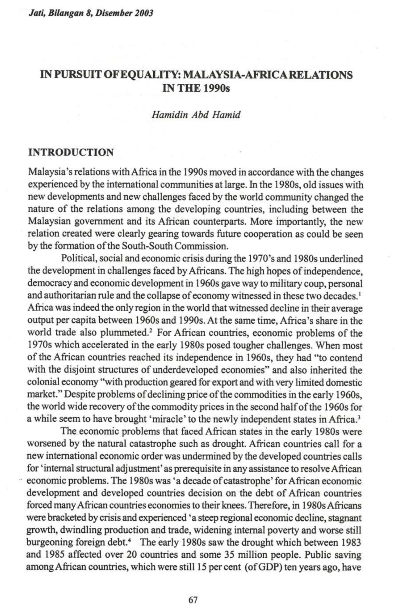 Malaysia's relations with Africa in the 1990s moved in accordance with the changes experienced by the international communities at large. In the 1980s, old issues with new developments and new challenges faced by the world community changed the nature of the relations among the developing countries, including between the Malaysia government and its African counterparts. More importantly, the new relation created were clearly gearing towards future cooperation as could be seen by the formation of the South-South Commission. Political, social and economic crisis during the 1970's and the 1980s underlined the development in challenges faced by Africans. The high hopes of independence, democracy and economic development in 1960s gave way to military coup, personal and authoritarian rule and the collapse of economy witnessed in these two decades. Africa was indeed the only region in the world that witnessed decline in their average output per capita between 1960s and 1990s. At the same time, Africa's share in the world trade also plummeted. For African countries, economic problems of the 1970s which accelerated in the early 1980s posed tougher challenges. When most of the African countries reached its independence in 1960s, they had "to contend with the disjoint structure of underdeveloped economies" and also inherited the colonial economy "with production geared for export and with very limited domestic market. " Despite problems of declining price of the commodities in the early 1960s, the world wide recovery of the commodity prices in the second half of the 1960s for a while seem to have brought 'miracle' to the newly independent states in Africa.