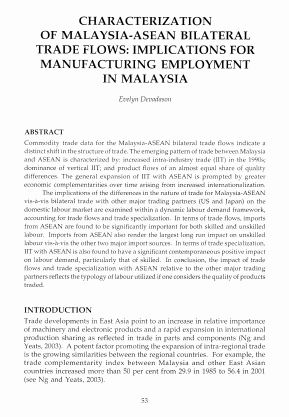 Commodity trade data for the Malaysia-ASEAN bilateral trade flows indicate a distinct shift in the structure of trade. The emerging pattern of trade between Malaysia and ASEAN is characterized by: increased intra-industry trade (IIT) in the 1990s; dominance of vertical IIT; and product flows of an almost equal share of quality differences. The general expansion of IIT with ASEAN is prompted by greater economic complementarities over time arising from increased internationalization. The implications of the differences in the nature of trade for Malaysia-ASEAN vis-a-vis bilateral trade with other major trading partners (US and Japan) on the domestic labour market are examined within a dynamic labour demand framework, accounting for trade flows and trade specialization. In terms of trade flows, imports from ASEAN are found to be significantly important for both skilled and unskilled labour. Imports from ASEAN also render the largest long run impact on unskilled labour vis-à-vis the other two major import sources. ¡n terms of trade specialization. IIT with ASEAN is also found to have a significant contemporaneous positive impact on labour demand, particularly that of skilled. In conclusion, the impact of trade flows and trade specialization with ASEAN relative to the other major trading partners reflects the typology of labour utilized if one considers the quality of products traded.